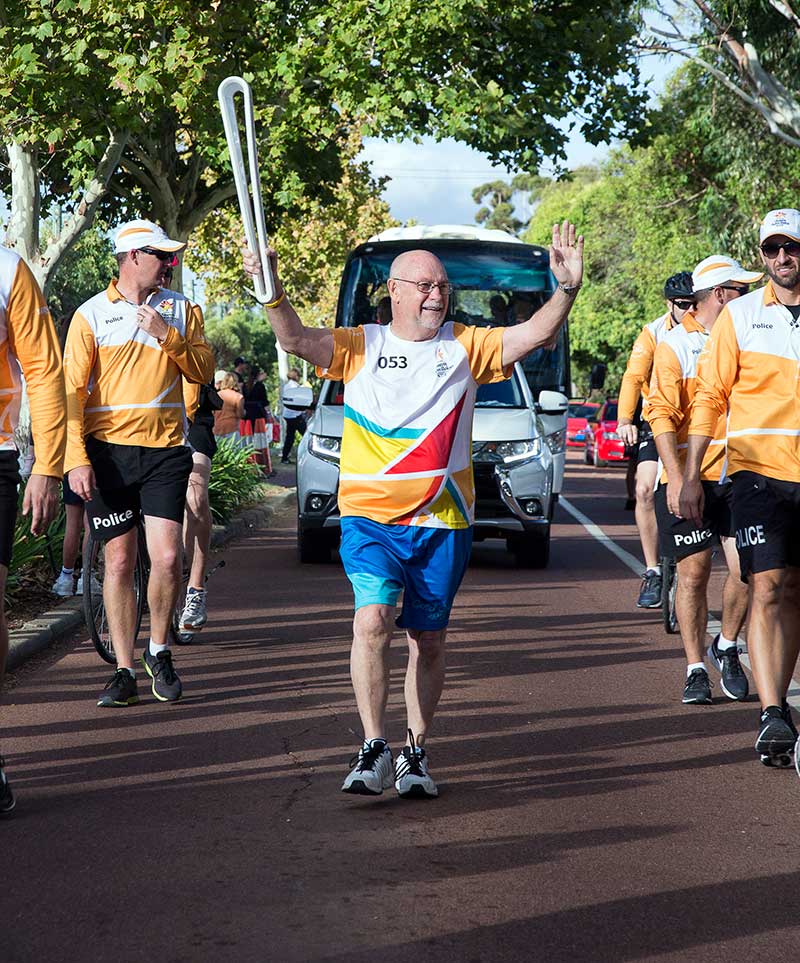 The Queen’s Baton was in good hands this week, carried through Guildford by longtime local resident and karate teacher Bob Allen, in the lead up to the Gold Coast 2018 Commonwealth Games. The humble instructor who prefers to let his actions speak for themselves was honoured to have been chosen as one of just over 310 baton bearers, relishing the opportunity to participate in the relay with many other distinguished community leaders and athletes.

With over 55 years of martial arts experience, Bob Allen 7th dan Kyoshi has amassed an extraordinary amount of knowledge and skills. Sensei Bob (as he prefers to be called) started his martial arts training in 1963, learning ju jitsu at the Midland Police & Citizens Youth Club. He commenced in Goju Ryu karate in 1969, began teaching classes in 1973, and opened his first dojo in Bayswater a year later. Since then, Sensei Bob has taught approximately 2500 students. Of these, approximately 50 younger students attained junior black belt rank, and about 60 adults have earned senior black belts. Several of his students studied with him as youths, returning to continue their journey with him decades later. Others who continued training beyond the initial black belt level have achieved higher ranks and instructor qualifications. Four of Sensei Bob’s most senior students have been awarded the rank of Sensei, and with their assistance at his Swan Hills Goju Ryu dojos, students benefit from over 190 combined years of karate wisdom.In addition to karate instruction, Sensei Bob has been a senior kata coach for the West Australian Karate Federation (WAKF) team since 2013. Athletes coached by Sensei Bob have reached equal 6 th place (and the top 8 for team kata) at the world competition level. Under his guidance, competitors have won numerous gold medals in competitions in Oceania and at the national and state levels. One of his students, Joe Coniglio, competed at the world level and was recognised by the WAKF as an outstanding sports star in 2000, 2003 and 2004. 3 other students have been appointed state team captains. Sensei Bob also served as a state and national referee of kata and kumite for 22 years, and on retirement from refereeing was recognised by the WAKF as referee of the year.

Sensei Bob has been the Western Australian Shibu-cho (chief instructor) with Okinawa Goju Ryu Ryusyokai karate since 2012, and was given the title Kyoshi (expert instructor) for Goju Ryu Australia in 2017. He is the WA representative for Okinawa Matayoshi Kobudo Rengokai Sohonbu, a worldwide organisation dedicated to traditional Okinawan weaponry, and also teaches tai chi to complement these disciplines.

Despite his illustrious CV, Sensei Bob likes to avoid the limelight, preferring to hone his own techniques and understanding to the highest degree. By his own account, Sensei Bob began his karate as a struggler, progressing slowly, but through tenacity and continued practice he developed solid foundations for his karate. He says that not having been a “natural” was a blessing in disguise, forcing him to work hard and analyse every move, and credits this attention to detail as key to his success. He feels it is his duty to accurately and faithfully transmit the knowledge and traditions of those who have gone before him, while seeking to inspire those who follow his martial path.

Reflecting on his experience as a baton bearer for the 2018 Queen’s Baton Relay, Sensei Bob admitted “I was shocked to discover that I was one of only a very few across WA chosen for this honour, but so proud to have my family and friends here to share this incredible moment in my life.” He added, “Every year, I set goals as to what I plan to achieve personally and professionally. I’ve been so fortunate recently that I’m beginning to run out of goals!” His students are sure, however, that this teacher, mentor and role model will find new ways to continue to raise the bar for himself and those he teaches.

Sensei Bob teaches students of all ages at his Midland and Mount Helena dojos. For more information, please ring Bob on 0419 922 609 or email bob@swanhillsgojuryu.com